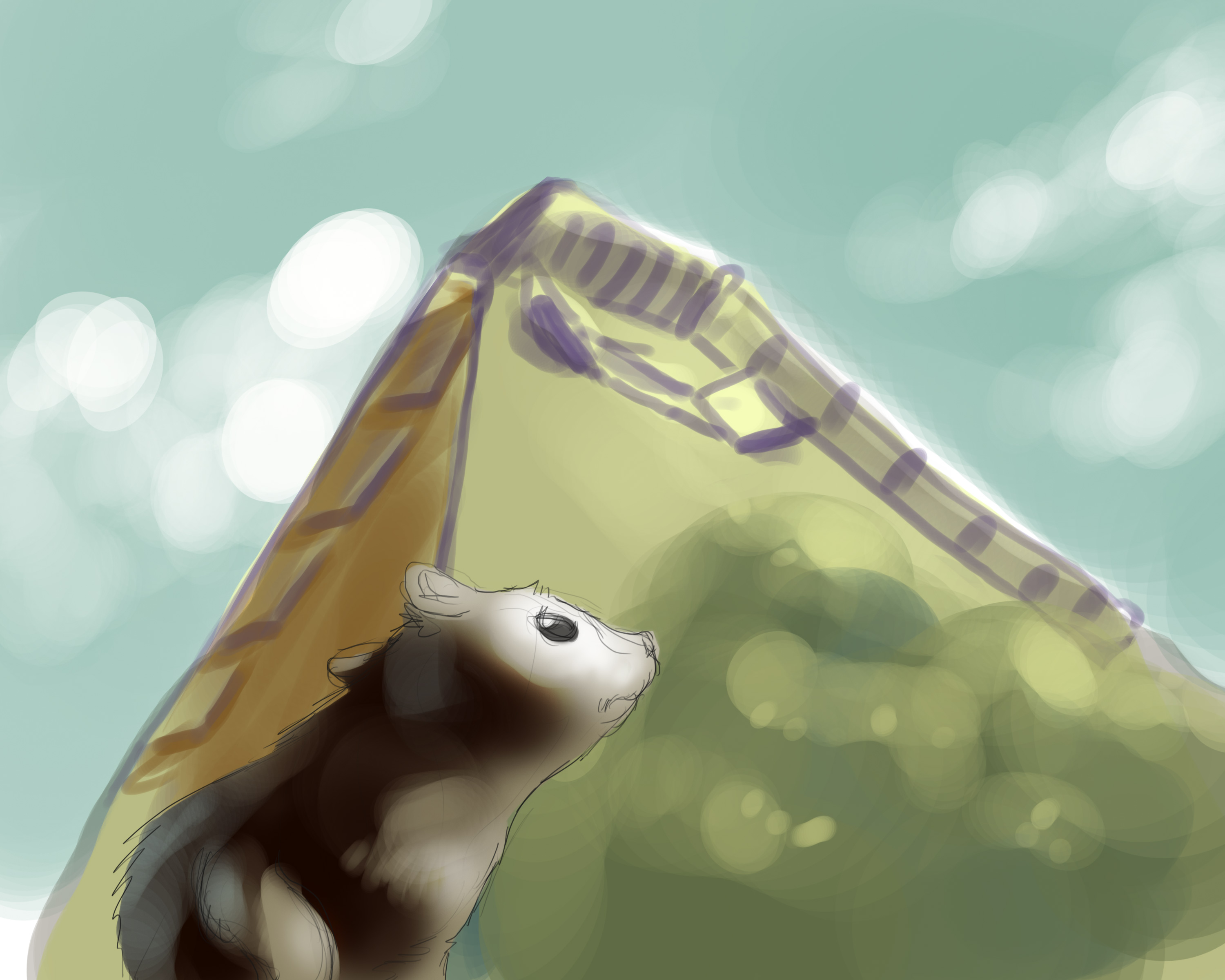 Here’s study for a little animation I’d dreamed up a couple months ago, featuring a weasel.

Watched Wristcutters tonight (watching it again with commentary now). The middle of the film is in the ruins of a desert theme park, with this little truck. One of the stars if the show, for sure. 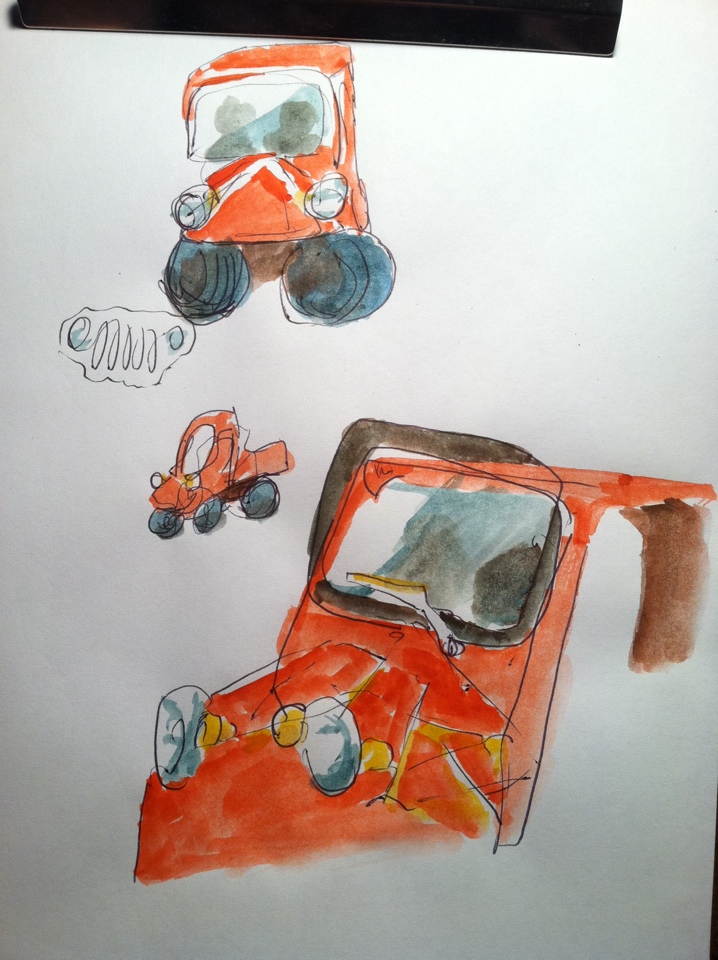 Very little today. Here’s a bit of tired sketching which waiting to pull my bread out of the oven. 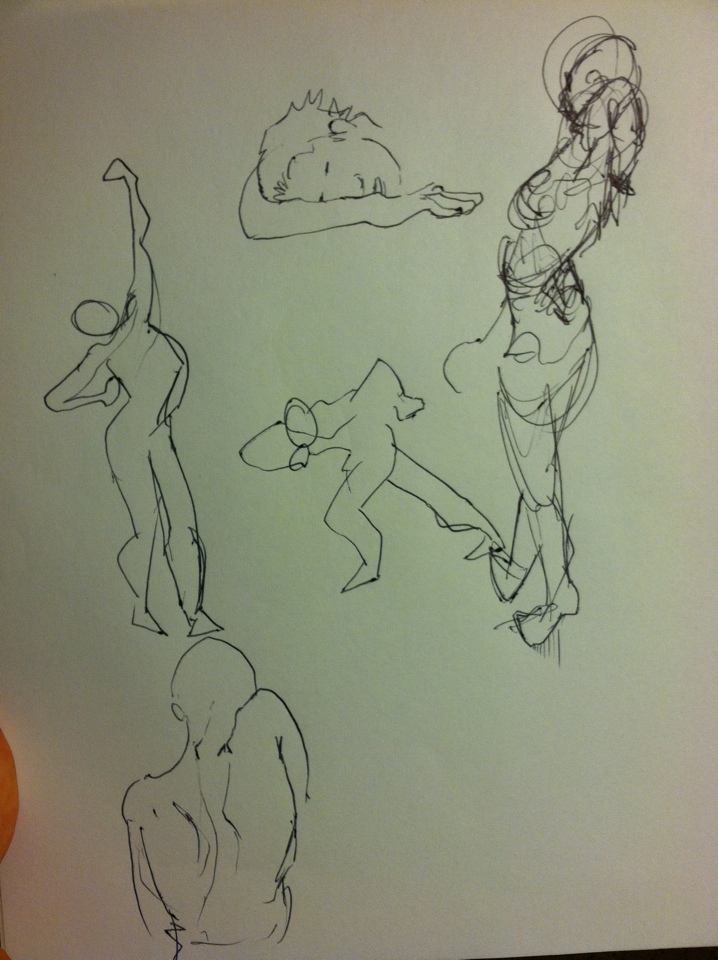 On my way home from work and I’ve decided that today I’ll challenge myself with a scene of some strange jungle ruins. 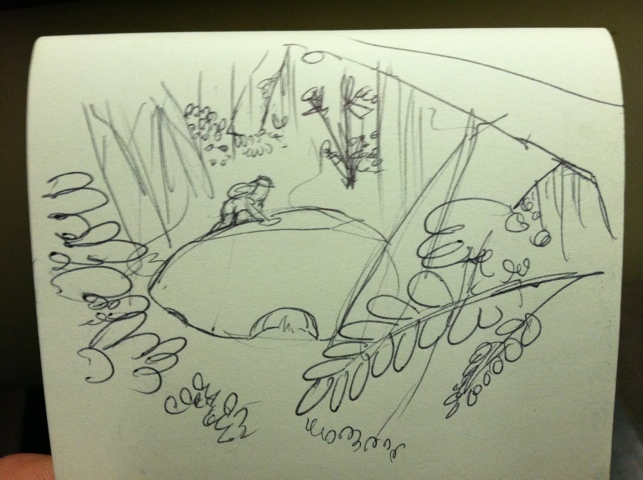 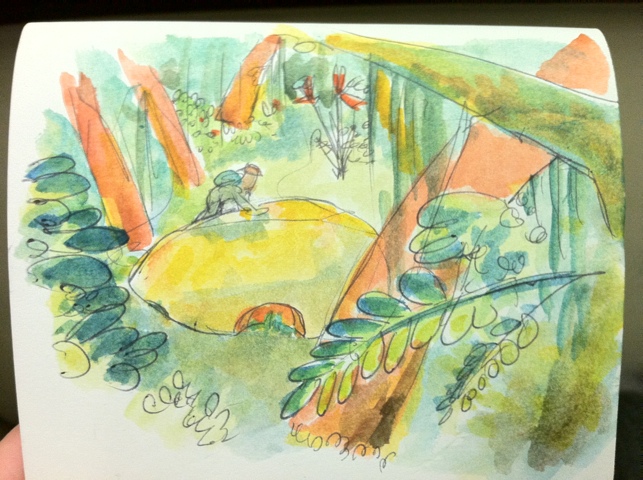 I’m kinda embarrassed with putting this up, even if nearly zero people read my journal. It’s a sketch of an idea I had sitting at my desk, looking out on the view that made me choose my apartment, and trying to be happy.

I’m so tired! I could barely stay awake to sketch this little dude. 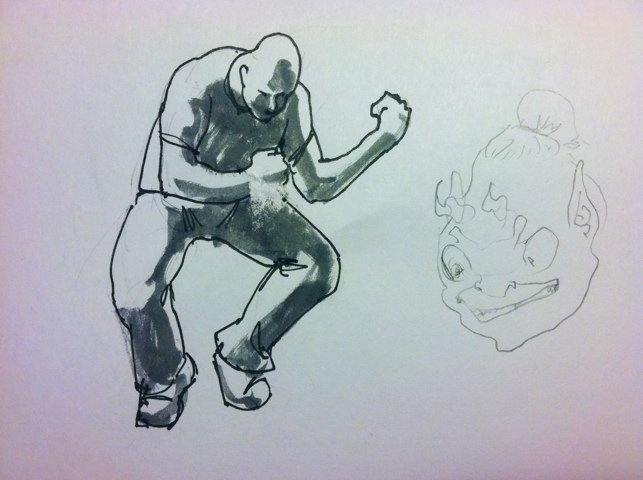 He was meant to be an almost threatening dude crouching just out of notice in some Southwest stony desert. I was listening to a Devotchka song having something to do with Mexico.

Here’s the perfect time to call on the maxim of round 2: draw something. This drawing wouldn’t last long even in my sketchbook; it’s a miss. But now it’s a recorded miss, so I won’t forget what I was shooting for.

Saw this fellow near the subway station on my way out this morning. He had a very graceful walk, but his body seemed out of proportion: low head, short torso, broad shoulders, and his shoes seemed just a bit too large for his feet. 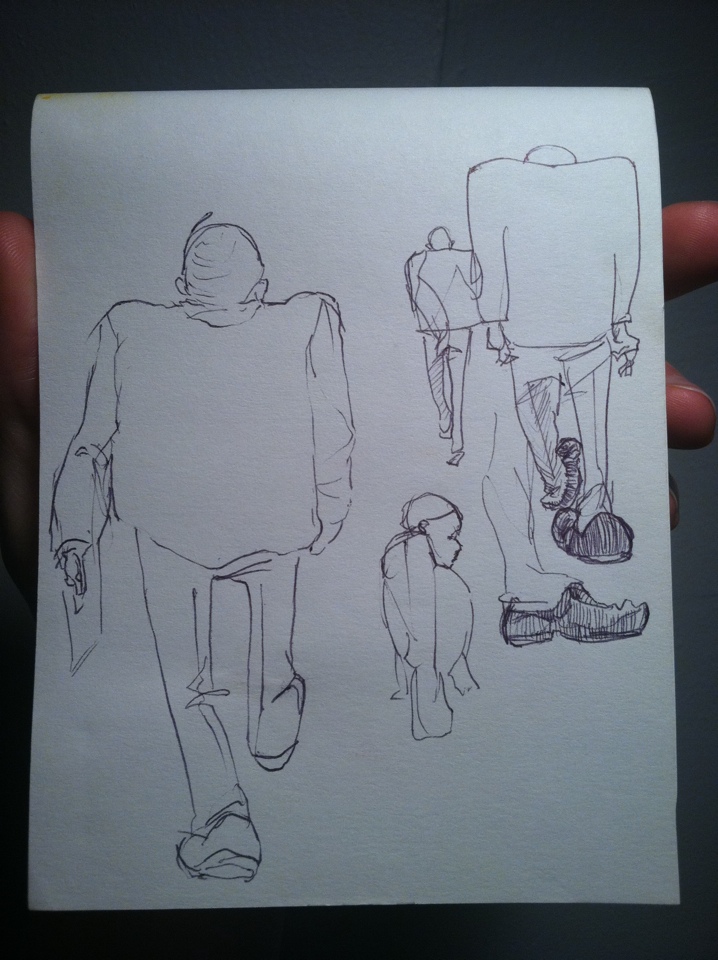 This snapshot shows his proportions: 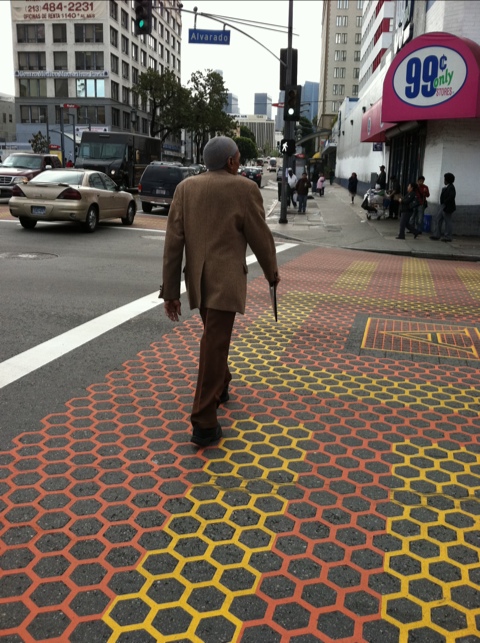 And this one his grace: 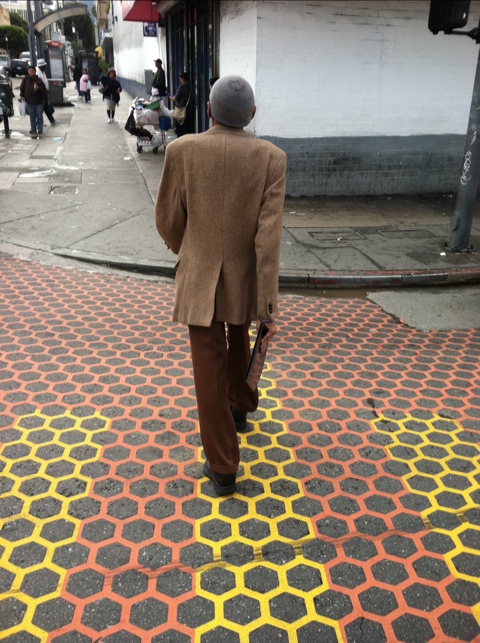 Hopefully I’ll have a chance to revisit that, as I didn’t do his stride or his hands justice.

I tried to plan this one ahead a little, and thought I’d draw planes in construction, or deconstruction. The kernel of an idea like this helps me get started, though it’s easy to begin drawing the same thing repeatedly and fall out of imagination. Gotta try again later. 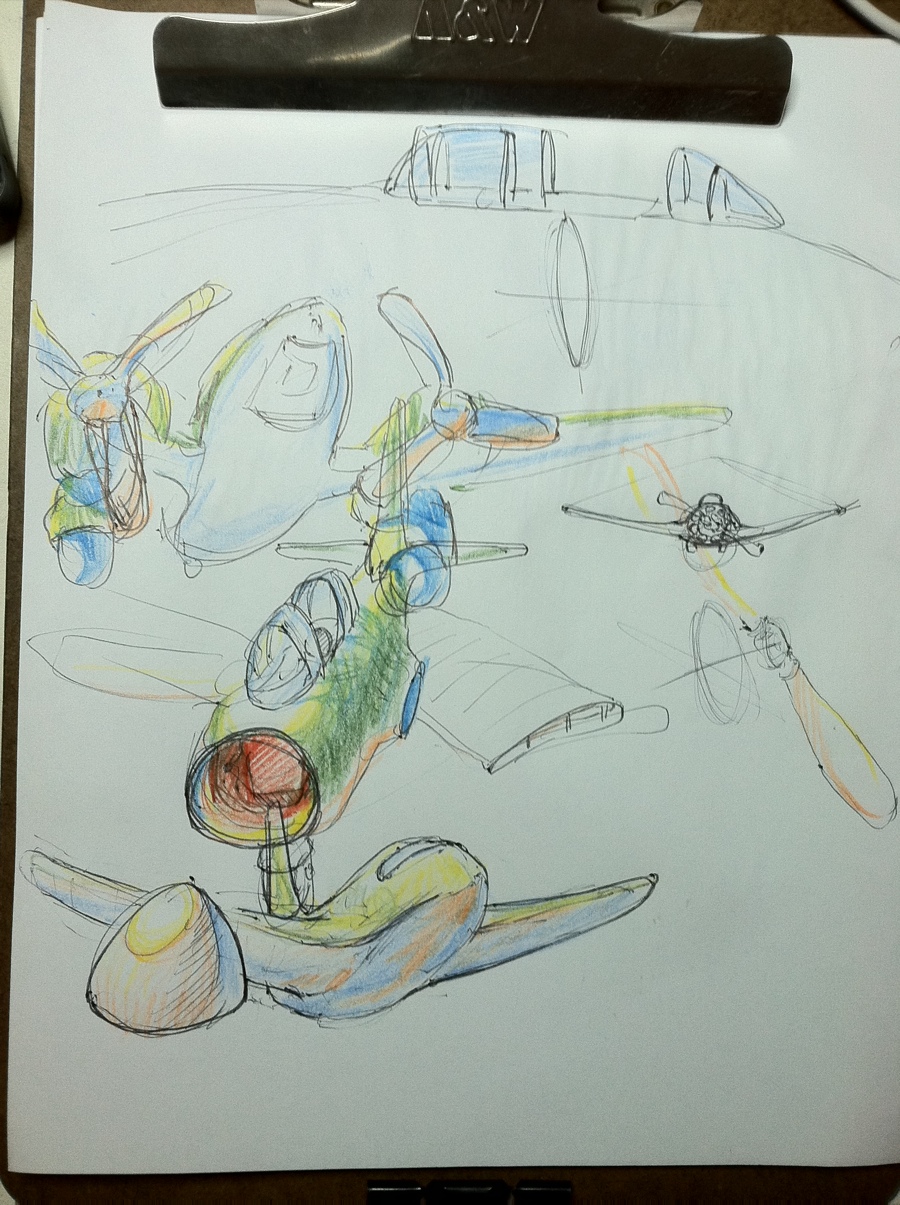 P.S. No drawing club for me tonight. I was pretty tired after work, and decided to catch up on sleep instead. Tho I would have been home by now anyway…

I took off from work on foot, heading toward some park or lawn under power lines, to relax and eat my lunch. Abutting Burbank to the south are the Hollywood Hills, and the terrain has looked more and more inviting with the brighter weather. I began to fantasize about walking up the slope, but I felt certain that someone owned it and there’d be a fence with threats posted all over it. And it’s too far to walk on a lunch break anyway.

But it’s such a beautiful day today. I noticed a lone, broad branched tree at the top—the shade and breeze there must be unmatched—and I just couldn’t leave it.

It’s still too far for a lunch break, so I’d just walk there until half my break was passed and turn around. The walk was pleasant enough, with lush trees lining the roads near Warner Bros.

When it was time to turn around, I was so close to the foot of the hills…I had to just go see if there was a trail or access anywhere, or if I’d be driven to hop a fence somewhere. Well, to come to the point, I didn’t have to hop a fence or trespass after all. I found an only slightly deceitful access, and had a really beautiful, lush, and wet trail to myself. I’ll be heading back there some afternoon before long. 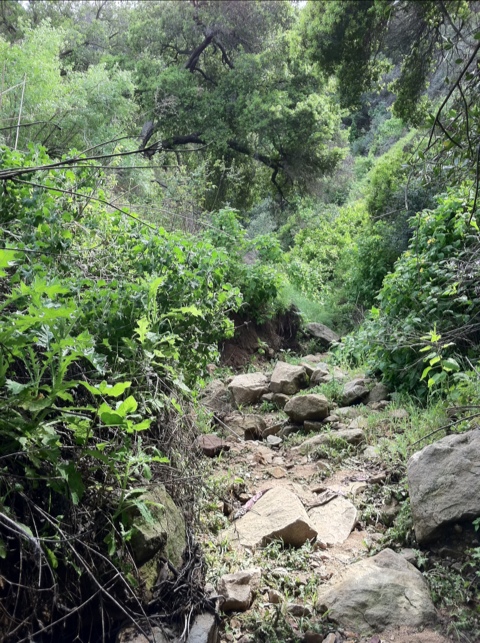 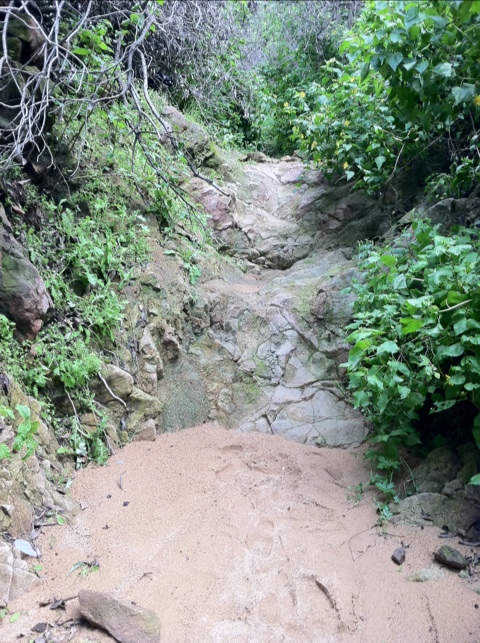 Here it’s Wednesday, and I haven’t drawn since Friday. I’d considered catching up, but that’s not really the point of the daily drawings. At first it was two-fold: consistency and commitment (ie. finishing a drawing now and then). The challenge I’d been denying myself is sticking with one drawing beyond a sketch. Well apparently consistency itself is a challenge for now. So I’m starting again.

This time I’ll post whatever I’m drawing every day, and they may be doodles, but I hope that by removing the pressure to make something good, I’ll continue to make something. I’ll also try to make time to draw at home regularly. I just won’t limit myself to that.

To start the second series, here’s a quick drawing I made on the subway of a man I saw just outside the station, and another thing: 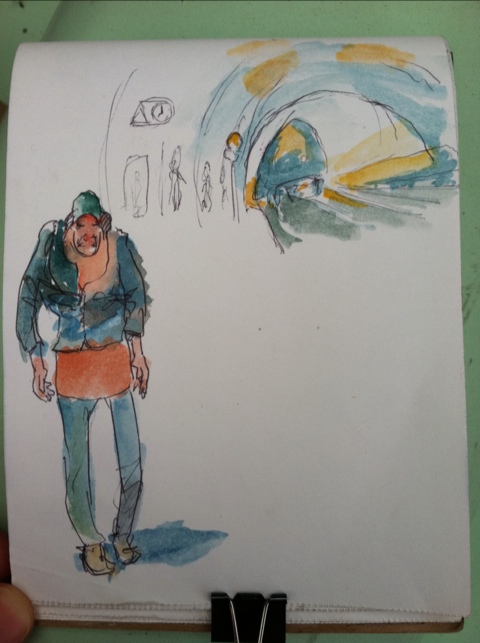 Later tonight I watched Empire of the Sun, which I’ve been meaning to see about my whole life. Thanks Netflix. Here’s what came out after:

It’s Hammer Time, er, war and famine time! Really should have put this on watercolor paper, but I’d set out only to sketch a pose with those pants. Also, I was just going to paint a sun, but the texture of the brush was more fun this way, and I’m sure the plethora of explosions in the film had a part in the decision.

I highly recommend the film, by the way. Some of the shots really stir the imagination, and it has me thinking along a Lord of the Flies vein, imagining the world from another dimension, practically. Crazy that it’s one world.

works-in-progress, and the occasional hello